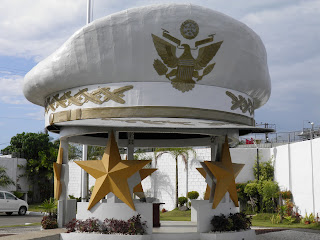 The MacArthur Memorial Marker is a landmark at Macabalan Wharf in Cagayan de Oro, Philippines which also serves as one of the attractions of the city. The Wharf where the memorial is located was occupied by the American forces during the Philippine-American War after they seized it from the Filipinos in 1900. It was also where General Douglas MacArthur, his family and his staff landed in Mindanao during WWII on his way to Australia. 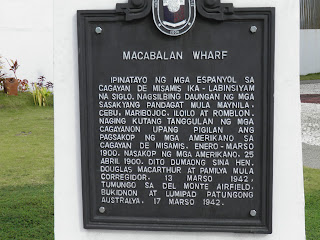 Inside and in the middle of the concrete fenced area is the peaked cap shaped monument. Inside it is a star-shaped plaque which inscribes the biography of the general and other information pertinent to the memorial site. Outside the structure is a tablet inscribing the brief history of Macabalan wharf. The huge peaked cap is a replica of the service cap of General Douglas Macarthur, and it also serves as the roof of the open structure. It is supported by five columns on a round base. Each of the columns is superimposed with outward facing five five-pointed stars which represent the rank of MacArthur. In one of these columns inside the structure is the star shaped plaque that is placed parallel with one of the stars on a column.  Also inside the structure is a replica in a glass box of PT 41 boat that was boarded by MacArthur, his family and his staff on their way to Mindanao. 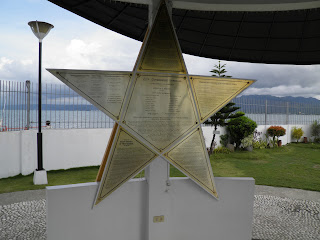 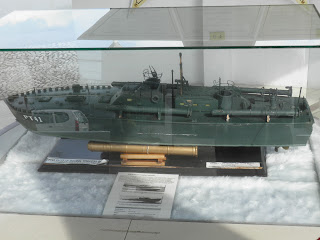 The peaked cap shaped monument is in essence the main and the most conspicuous fixture of the place. It is made of fiber glass and steel bars and is 5 meters in height and 8 meters in diameter. In front of the cap’s crown is a US coat-of-arms, and on the visor and on the band are golden oak leaf embellishments.
Mc Arthur along with his family fled Corregidor Island off the shore of Manila in compliance with the orders of President Theodore Roosevelt of the United States. His departure saved him from possible capture by the Japanese forces who had earlier conquered Bataan where American and Filipino defenders converged to defend it from them. 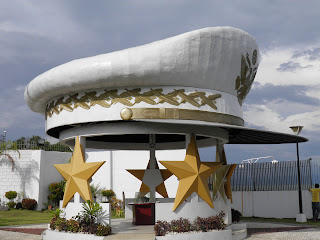 The general and his companions landed at Macabalan Wharf on March 13, 1942 where American and Filipino soldiers were waiting for them. Amid threat of Japanese detection, he proceeded to Camp Phillips, Manolo Fortich, Bukidnon and stayed at the Del Monte Clubhouse for several days. From the Diclum Airfield a B17 flying fortress flew MacArthur, his family and his staff to Australia on March 17, 1942 where he would direct the allied forces in its campaign against the Japanese.

The MacArthur Memorial Marker was inaugurated on March 13, 2008 or on the 66th anniversary of General MacArthur’s landing at the Macabalan Wharf. Former Philippine President Fidel V. Ramos led the ceremony. He was joined by former Mayor Constantino Jaraula and other local officials. Others who were also present were representatives of the American embassy and the Joint US Advisory Group (JUSMAG) which was represented by Lieutenant Colonel Frederick Riker.

The MacArthur Memorial Marker is visible at sea and in the air when one is approaching Cagayan de Oro either by ship or by plane. It is open for public viewing from 8 a.m. to 10 p.m. except on holidays.